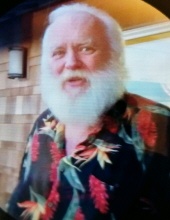 Patrick was born in Seaside, Oregon to Carl and Gene Hill in March of 1950. He attended and graduated from Seaside High School.

After high school, Patrick joined the United States Navy and participated in the Vietnam Conflict on board the USS Paricutin Ammunition Freighter.

Patrick worked as a musician traveling Canada and beyond for several years. He also drove long haul, log truck and worked in Sales.

Pat loved Street Stock Racing and loved riding his Harley. He was a proud member of the Patriot Guard riders of Oregon and a past director of the Seaside Legion Riders.

Pat was married to Dianna in 1987. Patrick had three children. Two daughters, Elizabeth and Gina. And one son Shawn. He also had a very special to him daughter Tammie.

He will be greatly missed by all including his favorite son-in-law, Travis, his talented grandson Mr. D, to whom their gamer sides came out and granddaughter Kailie, active soccer player in Springfield, Oregon.

Patrick was preceded in death by his father Carl, mother Gene, brother Tom and an infant sister.