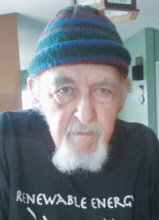 Peter E. Alburas, 87, of Seaside, died Saturday, May 4, 2013, in Seaside.
He was born Feb. 19, 1926, in Portland, to Peter E. Alburas and Anna E. Fix.
He received a Master of Arts at Portland State University and studied Journalism at the University of Oregon.
He married Sherry Swann and had three Daughters. They later divorced, but remained very close.
In 1980, he moved from Portland to the coast with his family, where he was an English teacher at Tongue Point for some time, then a substitute teacher in the area till the late nineties. After that, he continued to Volunteer, Helping first grade students at Seaside Heights Elementary until 2011. He also enjoyed the Seaside Library and Volunteered there on a regular basis.
He was a member of the Catholic Church in Seaside And The Writers Club. He loved animals and enjoyed writing, reading, music and helping children.
He is survived by a daughter, Chausonette (Alburas) Alcala of Seaside; a son-in-law, Cesar Alcala of Seaside; a daughter, Evie Alburas of Cannon Beach; and a daughter, Annelliese Alburas of Seaside.
A Mass will be held at 11 a.m. Saturday, May 18, 2013, at Our Lady of Victory Catholic Church, 120 Oceanway in Seaside.
Memorial contributions may be made to Seaside Heights Elementary School.
To order memorial trees or send flowers to the family in memory of Peter E Alburas, please visit our flower store.