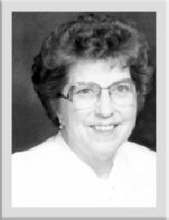 Priscilla (Peggy) Irene Roeser, 87 years old, passed away on January 10, 2013 in Astoria, OR. Peggy was born on November 26, 1925 to Charles O. Hansen & Jennie J. (Salmi) Hansen of Mist, OR. She was the youngest of four children. Peggy attended Mist Grade School, combining a few grades, and graduating at the age of 16 from Vernonia High School in 1942. She then moved to Portland, where she got a job with the Meier & Frank Company and attended classes at the Northwest School of Commerce where she graduated with honors.
She held several office and secretarial jobs in Portland prior to marrying Robert R. Roeser on March 19, 1948 in Vernonia, OR. The couple moved to Astoria, which has remained their home ever since, except for a short time, when they lived in Los Angeles, while Peggy worked for a Plumbing Supply Company, supporting Robert, while he attended mortuary college. Upon their return to Astoria, Peggy worked for Fisher Bros. and in a medical office prior to having two children, Robert Carl, in 1951 & Jane Marie, in 1956. Peggy was involved during her stay at home years in teaching Sunday & Vacation Bible School, PTA, as den leader for Cub Scouts & as troop leader for Brownies & Girl Scouts. In 1965 she began working for the City of Astoria where she eventually became the Executive Secretary to the City Manager and Mayor. Her career there lasted 22 years, retiring in 1987.
Peggy spent her leisure time and retirement years actively serving others as a member at Trinity & Zion Lutheran Churches & later at Peace Lutheran Church, where she was active in the Altar Guild, Martha Circle & on the church council. She also volunteered time working in the Maritime Museum Gift Shop, Meals on Wheels, the local Food Bank, and at Columbia Memorial Hospitals Gift Shop. She also sewed, knit, and crocheted prayer shawls and baby blankets and caps for the hospital to give to patients. Peggy was also a member of Alpha Iota Sorority and the Rebekkah Lodge. She enjoyed traveling, taking trips to Alaska, Hawaii, Canada, Europe, and around the U.S., as well as being a voracious reader, but her Bible remained her favorite book. Her family gave her great joy and pride and she was a devoted & loving wife, mother, grandmother & great-grandmother.
During her 64 years of marriage to Bob, they built the two homes theyve owned themselves and where she lived until her short illness and death.
She is survived by her husband, Bob Roeser of Astoria; Son, Robert C. Roeser & daughter-in-law, Cynthia R. Roeser, Portland, OR; Daughter, Jane Roeser Gillette & son-in-law, Martin Gillette, La Pine, OR; Grandsons Robert B. Roeser, Andrew Roeser, and Micheal Roeser, Portland, OR; Matthew Gillette & daughter-in-law, Amanda Gillette, Bend, Or; Marcus Gillette & daughter-in-law, Kerry Gillette, Salt Lake City, UT; and 3 Great-Grandchildren: Alexis, Kendra and Landon Gillette, Bend, OR; various nieces, nephews and cousins.
A memorial service will be held at Peace Lutheran Church, 565 12th St. in Astoria on Thursday, January 17th, at 1:00 pm. Interment will be at Willamette National Cemetery at a date yet unknown. Memorial Contributions may be made to Peace Lutheran Church or a charity of your choice.
To order memorial trees or send flowers to the family in memory of Priscilla "Peggy" Roeser, please visit our flower store.