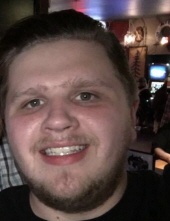 He was raised in Webb City, Missouri and began school at Madge T James kindergarten and attended Webster Elementary school.

At the age of 10 the family packed up and moved across the country to Washington State where he attended the rest of his schooling from elementary to online high school at the Longview School District.

On March 14th his son Bryson Dean Briley Witt entered Quade’s world and he cherished every moment he was allowed to spend with him.

After high school he met the love of his life, Randy Pickett. They got to enjoy 9 years together.
The family would pack up one more time and move to The Oregon Coast where Randy started working at The Verizon store and Quade would join him and work there for almost three years.
Quade was an excellent sales person, he treated every customer like they were family.
In April of 2020 Quade and Randy moved to Tennessee to be closer to Randy’s family.
While living in Tennessee Quade rescued a baby kitty and named her Luxa. Quade and her had a very special bond.
At the time of Quade’s death he had returned to Warrenton Or. to spend time with his mom and family.

Quade enjoyed many things including guns and shooting.. He was an excellent photographer, he enjoyed flying drones, collected baseball, football, and basketball cards. He enjoyed cooking and loved watching the Food Network, he would watch Food Network as a child instead of cartoons.

He is preceded in death by his father Jeffery Dean Witt, his Nanny, Nancy Sue Smith and his grandpa William Elmer Smith. There will be a celebration of life on Saturday April 10, 2021 at 2:00 p.m. at The Capricorn in Astoria.
To order memorial trees or send flowers to the family in memory of Quade William Briley Witt, please visit our flower store.