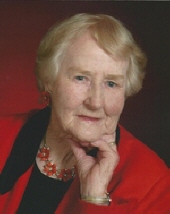 As the fog lifted on the morning of Friday, March 8, 2013, Ray Elizabeth Estes, 91, of Warrenton, quietly passed away at Columbia Memorial Hospital in Astoria.
She was born December 31, 1921, in Maryborough, Queensland, Australia, to Elliott William Gorman, a lighthouse keeper, and Mary Eliza (Hinds) Gorman, a schoolteacher. On that sunny morning long ago, Mary proclaimed that her infant daughter was a "ray" of sunshine.
Ray lived at Inskip Point Light, Queensland, Australia, until her father died when she was seven. The family then moved to Rockhampton, Queensland, where Ray attended school, leaving after the eighth grade to help her mother run a small grocery store in Rockhampton.
During World War II, Ray met her future husband, Arvin C. Estes, on a blind date. Arvin was an American soldier stationed in Rockhampton. The two were married on October 9, 1943, at the Archer Street Methodist Church, and their first child was born while Arvin served in New Guinea. After the war ended, Arvin sent for Ray and their young son to be brought to America, and mother and child sailed on the SS Mariposa into San Francisco harbor with scores of other Australian war brides and children. Ray would return to Australia to see her family only three times during her life. Together, Ray and Arvin built their family home in Warrenton and later had two more children. After almost 43 years of marriage, Arvin died July 31, 1986.
For over six decades, Ray was an active member of the Warrenton United Methodist Church. She loved her friends, her home, and especially her family. Her life revolved around family, and she was a devoted wife and mother. She thoroughly enjoyed family vacations and get-togethers, and she took great pleasure in the beauty of a garden, a sunny afternoon, a lively song, and a good hot cup of tea.
Ray is survived by one sister, Una MacPherson, of Rockhampton; two sons, Elliott Estes and his wife, Dale, of Waldport, Oregon, and Allen (Forrest) Estes of Warrenton; a daughter, Gayle Welch and her husband, Dave, of Svensen; five grandchildren; and nine great-grandchildren. She was preceded in death by a brother, William.
A Celebration of Life will be held at 1 p.m. on Saturday, March 16, at the Warrenton United Methodist Church, 679 S. Main Avenue. Any memorial contributions may be made to the church.
To order memorial trees or send flowers to the family in memory of Ray Elizabeth Estes, please visit our flower store.