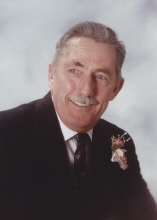 Richard "Dick" Douglas David of Nehalem, Ore., died Oct. 11, 2014, in Seaside. He was 82. Richard was born June 2, 1932, in Detroit, Mich., to Joseph and Edna (Yeager) David; he was the second of four children. He moved to Santa Ana, Calif., when he was 20, where he opened a window washing business. In 1968 he moved to San Jose, Calif., where he raised three children, Richard, Robert (Mary), and Jeannie (Cliff). Dick married Eleanor White in 1987 and enjoyed 27 years of marriage. They shared many fun adventures together traveling the country in their RV before finding the location of their dreams in Nehalem, Ore. While living in San Jose, Dick worked as an auto mechanic for over 45 years, specializing in Toyota vehicles. He retired from Almaden Toyota in 1998 before moving to Nehalem, Ore. Dick was an active member of the Rockaway Lions Club, serving as the Chaplain. He is survived by his sister, Betty. Known best as "Papa," he will be greatly missed by his loving grandchildren; Justin, Ashley, Lauren, Courtney, Katie and Sean, and great-granddaughter, Madalene. He is preceded in death by his brother, Sonny, and sister, Dorothy. A celebration of life service will be held in his honor at the Rockaway Lions Hall at 268 S. Anchor St., Rockaway Beach, OR 97136 on Saturday, Oct. 18, 2014, at 12 p.m. In lieu of flowers donations can be made to the Rockaway Lions Club. Hughes-Ransom Mortuary in Seaside is in charge of arrangements. Visit www.hughes-ransom.com to share memories and sign the guest book.

Funeral Home:
Hughes-Ransom Mortuary Seaside
220 N Holladay
Seaside, OR
US 97138
To order memorial trees or send flowers to the family in memory of Richard David, please visit our flower store.