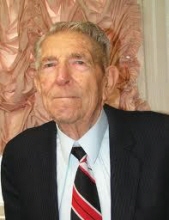 Robert (Bob) Raymond Roeser, 89, passed away on June 9, 2013 in Portland, Oregon. Bob was born on August 18, 1923 to Joseph Roeser and Samuel Ella (Holmes) Roeser of Columbia City, OR. He was the youngest of five children. Bob spent most of his childhood living in the Clark & Wilson Camp 8 Logging Camp, excelling as a high school 4-sport athlete, and graduating from Vernonia High School in 1942. He enlisted in the U.S. Army, where he served in the medic-corps, in the European Theater at the time of the Normandy invasion, as a Graves Registrar. He was also honored to represent the U.S. Army as a punter in the Army vs. College All-Star game in August of 1943.
After his WWII service ended, he lived in Mist, Oregon, working as a logger and courting a local girl, Priscilla (Peggy) Irene Hansen, whom he married on March 19, 1948 in Vernonia, Oregon. Robert served an apprenticeship with Hughes-Ransom Mortuary in Astoria, Oregon and pursued becoming a Mortician, by attending and graduating from the California College of Mortuary Science, in 1950
The couple returned to Astoria, where Bob began his 42 year career with Hughes-Ransom Mortuary. He was privileged to have been the first non-family member to own a portion of the business. He and Peggy welcomed two children, Robert Carl, in 1951 & Jane Marie, in 1956. Bob was very active in his community, as a member of the American Legion Clatsop Post #12, Independent Order of Oddfellows, Elks Lodge, Order of Freemasonry, The Lions Club, Astoria Rotary Club, Astoria Golf & Country Club and The Y.M.C.A., where he served in various positions and offices.
Bob was a member of both Trinity and Zion Lutheran Churches in Astoria during his life-time and served as president of the church board at Zion Lutheran when the two churches merged and became Peace Lutheran, and where he has since been involved on the Church board, on various committees and been a faithful servant to his Lord and Savior, Jesus Christ.
During the time he was working and raising a family he built two homes from the ground up, that the family lived in. He may have been known more for his carpentry skills than any other single accomplishment, spending thousands of hours in his basement shop building cedar chests, baby cradles, birdhouses, gun-stocks, fine furniture and refinishing or repairing furniture for others. He was generous to share these labors of love with friends and family.
Bob was an avid sportsman and athlete and spent countless hours camping, hunting, fishing, bowling, water-skiing and playing golf. He was a wonderful, generous, hard-working and hard-playing man who loved his family, his friends and found pleasure in giving comfort and support to those he came into contact with.
He is predeceased by his parents and siblings and by Peggy, his wife of 64 years, who passed away on Jan. 10, 2013. He is survived by their Son, Robert C. Roeser & daughter-in-law, Cynthia R. Roeser, Portland, OR; Daughter, Jane R. Gillette & son-in-law, Martin Gillette, La Pine, OR; Grandsons Robert B. Roeser, Andrew Roeser, and Michael Roeser, Portland, OR; Matthew Gillette & daughter-in-law, Amanda Gillette, Bend, Or; Marcus Gillette & daughter-in-law, Kerry Gillette, Salt Lake City, UT; and 3 Great-Grandchildren: Alexis, Kendra and Landon Gillette, Bend, OR; various nieces, nephews and cousins.
A funeral service will be held at Peace Lutheran Church, 565 12th St. in Astoria on Saturday, June 15th, at 1:00 pm. Private Interment will be at Willamette National Cemetery. Memorial Contributions may be made to Peace Lutheran Church or a charity of your choice.
To order memorial trees or send flowers to the family in memory of Robert "Bob" R. Roeser, please visit our flower store.