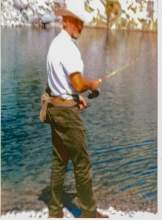 Robert D. Bulletset, 89, of Warrenton, passed away peacefully at home on August 19, 2018, with his family by his side. Bob was born in Portland, OR on June 2, 1929 to Frank & Fran Bulletset. At 16, he was too young to join the Marine Corps, so he ran away from home and joined the Merchant Marines, calling home from India to tell his mother he was okay. After he left the Merchant Marines, he went to work for a few months at the telephone company. As soon as he turned 18, he joined the Marine Corp., his lifelong dream. At the end of his 2-year career with the Marine Corps, Bob to the rank of Staff Sergeant. He was also a Captain in the Civil Air Patrol. His lifetime civilian career spanned nearly 50 years as a telecommunications cable splicer for the phone company. On December 23, 1950, he married his wife, Doris Samuelson, and together they had many adventures; biking through many European countries; hiking, fishing and camping in the High Sierras in California and traveling through many of the states. Most of these adventures were with his brother- and sister-in-law, Dwight and Elsie Cook. Bob was preceded in death by his parents, his wife Doris of 62 years, his brother Ken and nephew Fred. He is survived by daughters Ann Bulletset (Camas, WA), Katie Bulletset (Seaside, OR) and Von Whitney (Seaside, OR), sister-in-law Elsie Cook, cousin Rozeanne Douthit, nieces & nephews Jim, Claudia, Dave and Mike Cook; Susan, Denzel, Karen and Eric Wassilchalk; Debbie and Tim Bulletset, grandchildren Elizabeth, Michael & Isaac OCasey and great-grandson Owen OCasey. He had many, many devoted friends who made his life very special, and he loved them all. Bobs lifetime of giving didnt stop with retirement; he continued to serve his Church and assist his friends with various carpentry needs - never forget, measure twice & cut once. In lieu of flowers, donations can be made to Lower Columbia Hospice or Clatsop County Animal Shelter. A memorial service to celebrate Bobs life is scheduled at 10:00 AM on Saturday, September 8, 2018 at the Lighthouse Church in Warrenton. For details please visit the memorial tribute for Bob at www.hughes-ransom.com where you can sign the online guestbook, share a favorite memory or upload pictures and more. Funeral arrangements handled by Hughes-Ransom Mortuary & Crematory, Astoria, OR www.facebook.com/hughesransommortuary/