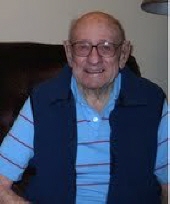 Robert "Bob" Meyer Mosar left us on the morning of April 1, 2013, three weeks shy of his 90th birthday. He was born April 19, 1923 in Portland, OR, to Martha and Alfred Mosar. He grew up in Clatsop County, OR, living on the family farm in the Lewis & Clark valley where he attended Chadwell School. He eventually moved to Seaside with his mother and stepfather, Jim Barker, where he attended Central School, and graduated from Seaside High School in 1941.
He started at Oregon State College (now OSU) in the Fall of 1941. He enlisted in the Army E.R.C. on December 14, 1942, and was called to active duty on March 25, 1943. Bob served in the 27th Infantry Division, 105th Field Artillery Battalion, A105mm Howitzer Outfit of the U.S. Army in the Pacific Theater during World War II. He was honorably discharged on December 24, 1945.
Bob graduated from Oregon State College on May 7, 1948 with a Bachelor of Science in Fish & Game Management. He married Betty Christensen on June 12, 1948. His lifetime career with Crown Zellerbach began shortly after graduation. He worked his way up in the forestry department and was instrumental in developing the Fish & Game Department in Youngs Bay and throughout Clatsop County, working on stream management and reforestation. He retired from CZ in 1978 as the Manager of the Forest Engineering Department.
Bob was an avid hunter, fisherman, clam digger and gardener, always providing for his family. He was instrumental in forming the Clatsop Plains Rural Fire Department. During retirement, he continued his lifelong passion for stamp collecting and also took up golf, mushroom hunting, and various other hobbies. He loved spending time with his family, friends, and cheering on his beloved OSU Beavers.
He is survived by his wife of 64 years, Betty; son Jim Mosar (Barbara); daughter Janice Smiley (Bill); daughter Marcia Beck (Jim); stepsister Sally Gidley; six grandchildren, Mike Mosar, Jeff Mosar, Katrina Beck Hagen, Melanie Broome, Megan Beck and Jason Broome; and numerous cousins, nieces and nephews.
Funeral services will be held at 11 a.m., Saturday, April 13, at Hughes-Ransom Mortuary in Seaside, with a graveside service to follow at Ocean View Cemetery.
Memorial contributions can be made to the Clatsop County Historical Society, PO Box 88 Astoria OR 97103-0088
To order memorial trees or send flowers to the family in memory of Robert M Mosar, please visit our flower store.