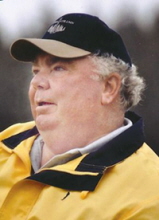 Robert "Bob" Raymond Stewart passed away on September 6, 2013, in Seaside, Oregon. Robert was born on April 9, 1944, in Portland, Oregon, to Raymond J. and Edith Walling Stewart Lewis. A year later the family moved to the Oregon Coast, where he grew up and attended schools, graduating from Marshfield High School in Coos Bay, Oregon.
On November 12, 1966, he married Joyce A. Ryals. They divorced in 1989.
Mr. Stewart served his country in the United States Coast Guard, where he received a letter of commendation from the Commandant of the Coast Guard while serving abroad the Coast Guard Cutter Chautauqua.
On September 9, 1990, he married Jan Ordway Osburn in Gearhart, Oregon.
He was a tug boat captain for Tidewater until retiring in April of 2012. Robert enjoyed traveling, golf, hot rods and his family.
He is survived by his wife Jan of Gearhart, Oregon, daughter Paula Owen of Seaside, Oregon, son and daughter-in-law Brian and Brandy Stewart of Seaside, Oregon, stepsons Corey and Michelle Osburn of Astoria, Oregon, and Ryan Osburn of Gearhart, Oregon, and numerous grandchildren. He was preceded in death by his parents and his sister Marie Cleveland.
A celebration of life will be held at 33485 S.W. Old Pine Drive in Gearhart September 11, 2013, at 2:00 p.m. Memorial contributions may be made to CCC Foundation Maritime Science Seamanship Program.
To order memorial trees or send flowers to the family in memory of Robert Raymond Stewart, please visit our flower store.