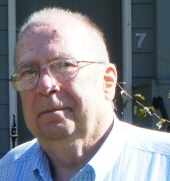 Roger Allen Rupprecht passed away at his home in Westport, Oregon on June 10, 2014. He was 76. Roger was born October 19, 1937 in Utica Township, Minnesota to Bernhardt J. and Lucy A. (Luehman) Rupprecht. He graduated from Lewiston High School in Minnesota in 1957. After high school Roger married his sweetheart Patricia Darlene Olson on October 25, 1958 at St. Matthews Lutheran Church in Winona, Minnesota. After moving to Oregon in 1959, Roger joined the United States Air Force. Stationed in both the U.S. and Germany, Roger served four years. During his lifetime, Roger's occupations included farming, homebuilding, and work at both the Crown Zellerbach paper mill in West Linn, OR, and in Wauna, OR, from 1975 until he retired in 2000. He was a former member of the Jaycees (Canby, OR), Concordia Lutheran Church (Milwaukie, OR), and USW Local 1097 Paperworkers. At the time of his death, he was servicing as a board member for the Westport Water Association and was a member of Faith Lutheran Church (Clatskanie, OR). Roger enjoyed many activities including fishing, boating, and camping. His hobbies included woodworking, cooking and gardening, but his true passions were helping friends and neighbors, and spending time with family and friends. Roger is survived by his wife Patricia (Pat) of Westport, OR; a daughter, Cindi Jeskey of Canby, OR; a granddaughter, Lauren Jeskey of Tualatin, OR; and a grandson, Ben Jeskey of Canby, OR. He is preceded in death by his parents Ben and Lucy, his sister, Mabel Braun, and his brothers, Hilbert, Elmer & Kenneth Rupprecht. A memorial service will be held on June 26, 2014 at 11:00 AM at Willamette National Cemetery in Portland, Oregon. Memorial contributions can be made to Zoar Lutheran Church Mission Fund, 190 SW 3rd Ave. Canby, OR 97013. Hughes Ransom Mortuary in Astoria is in charge of arrangements. Visit www.hughes-ransom.com to leave condolences and sign the guest book.