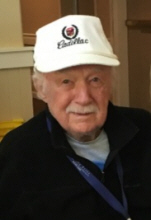 Roger Millard Evansen passed peacefully with his family near at the age of 94, on August 25th, 2016, while living at his treasured home on the Oregon Coast. He was born to Odin and June Evansen in Portland, OR on June 10, 1922. As a young boy, Roger's grandparents nurtured his love of the coast with frequent visits to the family cabin in Tolovana Park (Cannon Beach). In the early years, travel to the beach required at least a day of travel, with adventurous road conditions. Raised in Northeast Portland by his parents, Roger's family often celebrated their Norwegian and Swedish heritage through their love of cooking. Many of Roger's own delectable meals were favorites from generations past. In 1942, Roger enlisted with the Army Air Forces and served in the WWII efforts. Often private about his time served, he was stationed in Guam. His passion for air flight grew while he served overseas. Upon his return, he studied Engineering at the University of Portland. After college, a nearby neighbor caught his eye; smitten for life, Florence Bowes and Roger were married for 53 years. Together, they raised three children, Gary, Scott and Joan. Sharing their love for the coast, the family would spend each summer at the beach and in 1983, after working 36 years for Pacific Northwest Bell, Roger and Florence retired to Tolovana Park. In addition to his passion for planes, Roger was a meticulous model builder. Well respected for his attention to detail, he created extensive designs and layouts, from elaborate Christmas displays, to his HO gauge model railroad collection. Roger was active with the local American Legion, and the Cannon Beach Historical Society. He also volunteered as a docent for the Tillamook Air Museum. He was a regular in providing pastries for all, and enjoyed his drives to the museum in his little blue T-bird. The unconditional love Roger and Florence bestowed upon their children, and for those near and far, will forever bring a moment of pride to the family. Roger left a wonderful legacy for his three children and beloved grandchildren: Ira, Erica and Cooper. The family will deeply miss Roger as he gave so much, to so many. A service will be held at Calvary Episcopal Church in Seaside, September 24, 2016, at 11:00 a.m. Following, all are welcome to join the family at Roger and Florence's home in Tolovana. In lieu of flowers, the family requests memorial donations be made to your own favorite charity, in Roger's honor. Hughes-Ransom Mortuary & Crematory in Seaside is in charge of arrangements. Thank you for visiting hughes-ransom.com to share memories and sign the guest book.