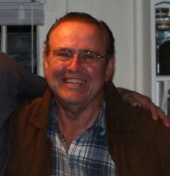 Ronald Craig Wright Sr. of Gearhart passed away peacefully surrounded by his family on July 31, 2014 in Portland at the age of 71. Ron was born February 27, 1943 to Eldon and Marian (Wright) Wright in Astoria. Eldon Wright passed away early in Ron's life and he was raised by his mother and stepfather, Edward Fackerell. Ron grew up and attended schools in Seaside, where he was fondly nicknamed Baby Huey for his large stature. He graduated from Clatsop Community College in 1976 with a degree in civil engineering technology. Ron served his country in the United States Army during the Vietnam War. On February 15, 1969, he married Carol Wilson in Seaside. Ron and Carol began their life together and raised three boys in Gearhart. Ron worked in construction, which led the family to move to Nebraska for two years where he was an engineer for Hensel Phelps Construction Company, which specialized in water construction and building bridges. The family relocated to Oregon, and he built bridges in Oregon and Washington for many years. The family settled back in Gearhart where Ron and Peter Shultz had a mushroom-growing business for a couple years. Family was very important to Ron. He and Carol hosted many family gatherings to keep the family close. He was a dedicated son, son-in-law, brother, brother-in-law, nephew and close to his nieces and nephews. His greatest attribute was his warm heart. He was kind, considerate and always willing to help others. A devoted husband and father, his boys always knew they could come to him for help, advice or most certainly, anything you could imagine in his shop. Ron adored his wife, and even when his health failed and he was unable to get out by himself, he made sure to send one of his boys to get her cards and gifts. Ron enjoyed fishing, spending time on his boat, tinkering in his shop, reading, working with stained glass and was always up for a game of cribbage. Ron was a past member of the American Legion Post 99, the Seaside Elks Lodge Post 1748 and was a volunteer fireman for the Gearhart Fire Department for many years. The world is a better place because of his warm smile and generous heart. He was a very special man who will be greatly missed. Ron is survived by his loving wife Carol Wright of Gearhart; son and daughter-in-law Ronald "Ron" Jr. and Tracey Wright of Gearhart; son and daughter-in-law Eric and Kerri Wright of Gearhart; son and fianc Darren Wright and Kellie Dunn of Seaside; brother William "Bill" Fackerell of Gearhart; aunt Margie Wright of Lacey, Wash; grandchildren Cameron, Isabella, Gabriel, Tyler, Elie, Zoee and Brenden Wright; and numerous nieces and nephews. He was preceded in death by his mother, father, stepfather and brothers Merlin "Punk" and Eldon "Jim" Wright Sr. A celebration of Ron's life will be held Sunday August 10, 2014, at 3 p.m. at Hughes-Ransom Mortuary in Seaside with reception to follow at The Seaside American Legion Post 99. Memorial contributions may be made to Lure 'Em For Life, an organization that provides fishing trips to disabled and underprivileged children, or the American Legion Post 99 Hughes-Ransom Mortuary in Seaside has been entrusted with arrangements. Visit the website at www.hughes-ransom.com to leave condolences and sign the guest book.