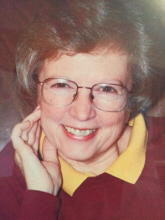 Ruth Marie (Jessen) Huckey passed away peacefully with family by her side at the age of 69. She had battled Leukemia for 7 years but always had hope and a great will for life. She was born in Astoria, Oregon, to Peter Frederick Jessen and Hulda Maria (Simonson) Jessen on June 5, 1947. She grew up in the Olney community with her two sisters and three brothers. Her love of square dancing came from belonging to the Olney Teenage Club. Ruth ventured to Albany to attend Business school and worked as a secretary in the area. She returned to Astoria to work in a local bank, thus beginning her career at Wells Fargo where she remained for 47 years. Her tremendous work ethic and dedication won her the respect and admiration of her many colleagues and family. She often traveled for work, but mostly for enjoyment, to Australia, Fiji, Japan, Panama, Puerto Rico, Costa Rica, Alaska and many trips to Canada and Hawaii. She married Marty Huckey in 1976. They settled in Oregon City, where Ruth remained after their divorce in 1985. Dick Click, her partner for over 20 years, reintroduced her to square dancing, of which they did for many years together. She was an avid flower enthusiast and enjoyed working outside in her yard. She shared her flowers and vegetables with family and friends. Ruth also enjoyed reading, sewing and owls, of which she had a great collection. Walking on the beach and collecting shells and rocks was a favorite pastime for her. Ruth had a positive attitude toward life, which was evident in meeting the challenges of her last years. Ruth is survived by four brothers and sisters, Richard (Junko) Jessen of Astoria, Alice (Jerry) Campbell of Berthoud, Colorado, Edward (Judy) Jessen of Tucson, Arizona, Irene (Gale Downer) Jessen of Roscoe, Illinois; a nephew, Carl Campbell of Windsor, Colorado; nieces Christine Lebeda of Loveland, Colorado, Andrea (Jayson) Holmstedt of Astoria and Deborah Luty of Portland; and great-nieces and nephews Matthew Lebeda of Colorado, Amanda Lebeda of Colorado, Jonathan Luty of Washington, Jessen Luty of Portland, Dodger Holmstedt of Astoria and Nayomi Holmstedt of Astoria. Thank you for visiting Hughes-Ransom Mortuary & Crematory at hughes-ransom.com to share memories and sign the guest book.