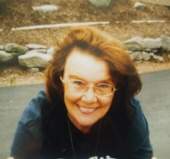 Shirley Loretta Irvin lived a full life which ended on October 13th at 7:40pm, surrounded by a family members who adored her. She was 86 years old. Born December 28, 1931 in Seaside, Oregon, to Virgie Shultz and Roy "Hap" Magnuson, Shirley grew up with her younger sisters, Kay and Ginger, who survive her. Her older brother, Donald, preceded her in death during childhood. Shirley graduated from Warrenton High School in 1949 and later that summer, she married her high school sweetheart, Jack Irvin. The two, who had met in an ice cream parlor, married on August 26, 1949, beginning 64 years of marriage until his death in 2003. Shirley worked for the first few decades of her marriage. First, at the cannery and then as an operator at the phone company. Finally, after she and Jack moved to Portland, she worked as waitress at Dan & Louies Oyster Bar for over 15 years. Her wages first paid for the familys groceries, then made the car payment. Of course, Shirley also spent her energy raising four kids and keeping her husband Jack on his toes. Eventually, Jacks wages increased to be able to cover family expenses and in 1974 Shirleys desire to be a stay-at-home mother became reality. Shirley is best known for her loving spirit and total devotion to her husband and family. Anyone who entered her home would be greeted with a hot cup of coffee and food. Shirley spent decades developing her skill in wood carving. She is survived by hundreds of hand carved Santas, many gifted over the years to friends and family. Shirley loved Christmas, gardening, the daily crossword, and playing bridge with friends. As a devoted member of the Warrenton Christian Church, Shirley was on a first name basis with Jesus. At the end of her life, she spoke often about seeing Jack in heaven. Shirley is survived by a son, Donald H. Irvin, two daughters and sons-in-law, Marleen & Paul Torian, and Kathy Irvin & Mike Fiske; six grandchildren, and 11 great-grandchildren. A son, Roy Irvin, four grandchildren, and her cat Minnie preceded her in death. We love you a hundred million, Shirley. A memorial service will be held for Shirley at Warrenton Christian Church on Friday, October 19th, 2018 at 12:00 pm. All are welcome, just as they were at Shirleys home throughout her life. Memorial contributions may be made to the Astoria Mission at 62 W. Bond St. Astoria, OR 9713.