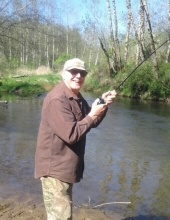 Stephen Shellabarger was born in Linsey, California on April 4th, 1939 to his parents Francis Ephrem Shellabarger and Lorena Cecelia Le Baron. In 1957, at the age of 18, he joined the Navy. During a ship repair in Seattle, WA, he took a trip to Kent, WA where he met the love of his life, Joyce Ann Bishop. They kept in touch by writing many letters. On August 15th, 1959, Stephen and Joyce married. They had two children, Stephen Mark and Deirdre Lynn. Stephen had many occupations that included, but not limited to, commercial fishing (his favorite), machinist and x-ray technician. In 1976, Stephen and Joyce moved to Oregon where they bought their first home and raised their children. Steve was a devoted husband, father, grandpa and great-grandpa. In 2000, Steve retired from Autio Company and built the home of him and his wifes dreams with the help of his Son and Dave Moody. His hobbies included building log furniture for their 3-story log cabin and his families homes. His passion for fishing led to the start of his small FishieOn Lure business. He recently passed on this business to his Great-Grandson, Treven Moreland. Stephen was preceded in death by his parents, daughter Deirdre and brother Tim. He is survived by his wife, Joyce, his brothers, John and Francis, son, Stephen Shellabarger (Sabrena), grand-children, Shandy Moreland (Kent), Kristy Keller, Ashley Keller, Little Star Rider (Dougie) and 8 great-grand children, Jake, Brook, Treven, Bryson, Blake, Zaeleigh, Jacob and Kinslee. Stephen passed away comfortably in his home surrounded by his family and loved ones on February 13th, 2019.