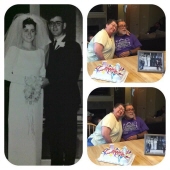 Susan Marie Enslow was born in Seaside, OR on February 15, 1948 and raised in Astoria OR by her adopted parents, Don & Mary (Durant) Forrester. She graduated from Astoria High School in 1966. Later that year she got married to the love of her life, David L. Enslow on September 17, 1966. From 1976 to 1996, Susan lived in Aloha, OR Where she was involved with the SCCA Oregon Region from 1971 to 1991. During the 1980's Susan was a shipping supervisor for Pioneer Optics. Dave & Suzy moved back to Astoria in 1996. In 2001 she became a water aerobics instructor for the Astoria Aquatic Center and worked there up until she departed this life on March 24, 2017 at the age of 69. Susan had a deep love for all kinds of animals and would take in any stray that followed her home. She enjoyed many activities that included bowling, camping, crocheting, reading and listening to music (which was ever-present wherever she was). Those who knew Susan cannot forget how her laugh and smile could light up the room and express the love she felt for all who were in her presence. As a mother, Susan instilled the importance of sharing her of love of life. Some would say that she was a mother to anyone & everyone. Those fortunate to have known Susan will miss her presence. Susan was preceded in death by her adoptive parents. She is survived by her husband David (of 50 years), her son Jeff, daughters, Judy, Paula Enslow Dale, and Dana Carender-Warren & 2 grandchildren, Randall Enslow and Heidi Balogh. Adoptive sister Linda and adoptive brother James Paul. Aside from immediate family Susan leaves behind a long list of extended family with whom she held close to her heart. In accordance with her family's wishes Susan will be cremated and inurned at Willamette National Cemetery on Tuesday, April 11, at 12:30 PM. A private celebration of life will be held at a time and place as yet to be determined. In lieu of flowers, the family has asked that donations be made in her name to the American Heart Association.