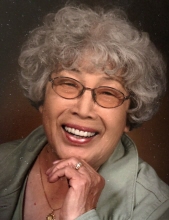 A Seaside Treasure Has Passed On December 27, 2018, our mother, Takeko "Susie" Wahl, passed away, after a year long battle with lung cancer. She passed away peacefully in her sleep, with family by her side. Takeko Wahl was born in Karatsu Japan on January 6, 1933. She was the eleventh of twelve children and her mother passed away from childbirth, forcing her father to give her up to be raised by her aunt and uncle along with an older brother. She grew up in difficult war-time Japan. After high school she attended secretarial school in Sasebo where she met Charles Wahl who was in the Navy and stationed in Sasebo. They fell in love and were married and had their children, Joe and Kim, while serving in Sasebo. Takeko would always say that Charles was the love of her life. After Charles was diagnosed with lung cancer the family was flown to the San Diego Naval hospital where he underwent treatment. Shortly after receiving treatment he passed away in 1959. Since Charles was from the Astoria area and had a mother and sister in Gearhart and Seaside, Takeko moved the family to Gearhart to raise their children. She eventually purchased a home on Neawanna street in Seaside where she raised their children. Takeko worked for many years for Seaside High School where she touched generations of students who were inspired with her many Asian styled specialty dishes and where she later introduced and managed the "snack bar". One of the high lights of her time there was assisting the world renowned chef James Beard in his famous cooking school. During this time she had the opportunity to meet and get to know many well known chefs at this cooking school. After retiring from the school district she enjoyed many different activities including the Seaside Gourmet Club, playing pinnochle, as well as participating in and later leading the Tai Chi and Qi Gong classes. She enjoyed travelling in the US and internationally throughout Europe and Japan. When home she spent many hours in her beloved garden. One of her favorite past-times was playing the video machines at various casinos, but mostly enjoyed playing locally at WestLake and Pudgys/Finns restaurants. But most of all she enjoyed being Grandma to Joe and Kims children - Ryan and Kelsey Wahl and Sumiko and Christopher White. She loved cooking for her family and friends more than anything. Takeko is survived by her children Joe Wahl and Kimiko White, their spouses Lora Wahl and Bill White, grandchildren Ryan Wahl (wife Jen), Kelsey Wahl, Sumiko White, and Christopher White as well as her close family friends Dale Stampflee and Sheri Schuman who lived with her part of the year and gave much of their time caring for her during her bout with cancer. The family would like to thank the doctors, nurses and staff of Providence St. Vincents Hospital, Providence Seaside Hospital and North Coast Hospice for their professional and compassionate care of mom during this last year. Celebration of Life service will be held on January 12, 2019 at 1:00 PM at Hughes-Ransom Mortuary in Seaside. A reception will follow at the American Legion Post 99 in Seaside from 2:00 PM to 5:00 PM In lieu of flowers or gifts, please make a donation to the Takeko (Susie) Wahl Memorial Scholarship Fund at First Interstate Bank in Seaside. The family would like to invite everyone to add a favorite memory or photo of Takeko (Susie) to the online guest book. These will be gathered together and printed into a memory book which will be at the Celebration of LIfe and reception. "