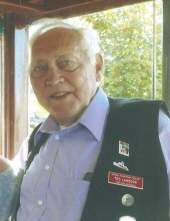 Ted Harold Langdon passed away on January 6th, 2021 at home due complications from a brain tumor. He had surgery 20 years ago however he continued to battle it in 2018 and 2019. Unfortunately, we found out that the tumor was still growing and had gotten bigger a few months ago. He was born in 1942 to Kenneth H Langdon and Borghild C. Olsvic.

In 1962 he married Sheryl Haines. They had 4 children Robert, Gary, Larry, and Dawn Marie. They later divorced. Ted then re-married Donna (Schaal) Underhill in 1981.

Ted grew up in Alder Brook with his brother Richard and sister Lois. His first job was working on the docks helping with nets and later gillnet boats as a deck hand. He attended school in Astoria and graduated in 1960. He joined the Air Force and was stationed in Idaho where he worked on B-47 Stratojets. After he served four years he went to work for Crown Zellerbach. He worked there for 20 years until it shut down. From there he started in the Astoria School District as a custodian. He retired in 2004 as head custodian at Astoria High School. Ted volunteered with the trolley where he was first conductor, engineer as well as a scheduler. The 15 years he was with the trolley he met some genuinely nice people and made a lot of friends. He even had a pen pal from Germany.

Ted was an avid fisherman on the Columbia River and enjoyed going out clam digging. He loved his sturgeon, clams, shrimp, halibut and Pepsi. He was a great traveler. He would often go to Alaska to see his son Robbie and to Texas to see his daughter Dawn Marie. He also went to Alaska on a cruise ship. He was a super fan of the Seahawks, Mariners, Oregon State and the Astoria teams.

Ted was a simple man who liked to laugh. If he liked you, he would tease you. Ted had great empathy for several friends after their loss of a child. He would be the first to reach out and help in any way he could.

He was preceded in death by his mother and father, a brother Richard Langdon, sister Lois Langdon and twins Gary And Larry.

There will be a memorial later in the spring.
To order memorial trees or send flowers to the family in memory of Ted Harold Langdon, please visit our flower store.