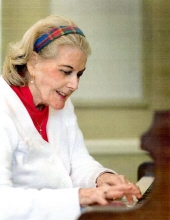 THERESE ELLEN SPENCER MERSEREAU Therese "Terri" Mersereau died peacefully in her sleep at Maryville Nursing Home on Sunday, February 1, 2015. She was 87 years of age and had been struggling with her health for several years. Born October 28, 1927 in Vancouver, British Columbia to Annabelle McDonald Spencer and Christopher Lloyd Spencer, Terri attended Convent of the Sacred Heart School. Blessed with a natural interest in music, Terri played both violin and piano, and in 1939 at the age of 11, won First Place at the British Columbia Music Festival for pianist 12 and under. That year at the same festival, she won First Place for violinist under 12. Several years later, while in her teens, she competed and won a trophy at the annual CBC (Canadian Broadcasting Company) Talent Festival. Terri received a three-year scholarship to the Toronto Royal Conservatory of Music with an emphasis on composition. She won a competition that led to an introduction and performance with Canadian composer and pianist Oscar Peterson, who had himself won the CBC Talent Festival. Terri's solid classical training was becoming profoundly influenced by Bill Evans and other jazz musician greats. She was accepted at Mills College and studied under Darius Milhaud. It was at Mills that she became acquainted with one of Milhaud's most famous students, Dave Brubeck. Terri also met her first husband while at Mills. Robert Francis Arenz was a gifted classical pianist and linguist, fluent in English, French, German and Italian, who had attended Catlin Gable, Yale and had studied at the Sorbonne. Together they had five children: Eric, Elaine, Tre, Annabelle, and Heidi. While the children were still young, Terri continued to perform on stage in Seattle and Portland as a vocalist and pianist. She appeared at the 1962 World's Fair in Seattle. On November 23, 1964, she recorded some of her most noteworthy compositions at a studio in Los Angeles with Bill Hood (sax, clarinet, flute), Ernie Hood (composer), Jack Shelton (trumpet), Bud Shank (flute), Gene Cipriano (flute, oboe, English horn), Vince De Rosa (French horn), Emil Richards (vibes, percussion), Al Hendrickson (guitar), Chuck Berghofer (bass), Shelly Manne (drums) and Bones Howe (engineer). By the mid-60s, Terri was married to second husband, Roland Mersereau, the father of Susan, Peter and John Mersereau. Together with her five children, Terri and Rol lived in Lake Oswego, where her love of horses and dogs, snow skiing and waterskiing, and her skills as a gardener, were nurtured. She composed and arranged at home, and performed as her family schedule allowed. Terri invited Jamie Faunt (bass) and Ron Steen (drums) to perform at a party at her home, and soon after, they joined her as part of the Terri Spencer Trio, delighting audiences at Lea's and the Benson Hotel. Then in their teens, Ron and Jamie went on to become leaders in the Pacific Northwest jazz scene. Ron Steen recently said, "She was a remarkable jazz vocalist, the best singer I've ever heard. She was also an incredibly gifted composer and a great piano player. And she was as beautiful as a movie starI was a teenager when she gave me the opportunity to perform in some of the best venues in town. Meeting her changed my life. Doug Baker, formerly of the Oregon Journal named a March 1967 "Baker's Dozen" column, "World Grows Older, But Terri Just Grows Better." He wrote, "I first heard Terri's piano and the next day I was rhapsodicClean, sharp, inventive and at times, highly originalI drove to Seattle one late summer evening to hear her unforgettable performance with Dave Brubeck at the Green Lake Jazz Festival. I caught her one night in the old Multnomah Hotel's Stirrup Room and again at the Canyon Club in West Slope. Another evening I found her at a jazz joint in downtown Seattle called 'The Door'" Terri's music was deeply nurtured by her Catholic faith. She composed a Mass that was written and performed with Dean Applegate at Holy Rosary Church in the 1980s, and composed many hymns over the years. Moving to the Oregon Coast with Rol in the early 1980s brought fresh inspiration and opportunities to express God's glory and grandeur at the keyboard in their beautiful home, built with Rol's son, John Mersereau. She recently remarked, "I remember pondering on the significance of Our Lady, Mary, and her "Yes." I have been blessed by the gift of music, and recognizing the gift from God, have tried to develop the talent to the best of my ability in all of the directions I was ledLife has been good. I am enormously proud of my children from both marriages, and the generations that have followed. All is well." Terri is predeceased by her husband Rol (January 1999) and by her beloved daughter Tre, a renowned ceramic artist (May 2003). In addition to her four children and three stepchildren, she is survived by 19 grandchildren and 10 great grandchildren. Visitation is planned at Hughes-Ransom Mortuary, 220 North Holladay Drive, Seaside, from 5:00 to 7:00 p.m. on Friday, February 27, to be followed by a Vigil Service at 7:00 p.m. Funeral Mass will be celebrated at Our Lady of Victory Church, 120 Oceanway Street, Seaside, at 11:00 a.m. on Saturday, February 28, 2015. Visit www.hughes-ransom.com to leave memories and sign the guest book.
To order memorial trees or send flowers to the family in memory of Terri Mersereau, please visit our flower store.