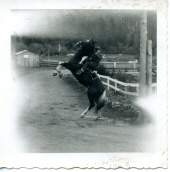 Terry William Swigart "SWAG" of Cannon Beach, Oregon, died peacefully at his home on Dec. 4, 2015, at the age of 72. Terry was born on Jan. 10, 1943, in Portland, Oregon, to parents Paul and Donna Marie (Bentley) Swigart. Terry was very proud and honored to have served his country in the Army National Guard. Terry was honorably discharged in the spring of 1970. On Dec. 10, 1975, in Portland, Oregon, Terry was united in marriage with Carmen Rivadeneyra. Terry and Carmen enjoyed 40 years of marriage. Terry, along with Carmen, owns the Sea Ranch Resort and Stables in Cannon Beach, Oregon. Terry was a member of the Cannon Beach American Legion, where he enjoyed spending time with his many friends. Terry was strong and daring, yet gentle and kind. He loved his family and friends. He had an adventurous soul and loved traveling, deep-sea fishing and flying. He also enjoyed horseback riding and exploring new terrains on his motorcycle. He touched many peoples' lives, and we will miss him dearly. Terry is survived by his wife, Carmen R. Swigart of Cannon Beach; and a daughter, Miracle Tumi Swigart Johnson (husband Tim) of Portland, Oregon. A celebration of life service will be held at 4 p.m. on Saturday, Jan. 9, 2016, at the Cannon Beach American Legion Post.