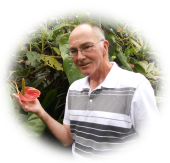 Thomas Hubik of Gearhart, OR lost his 17 year battle with cancer on February 15th, 2014 surrounded by his loving family. Tom was born on September 30th, 1946 to Louis and Jane Hubik of Sierra Madre, CA. He was the second of eight siblings. Joining the US Navy in 1963, he honorably served in Vietnam on a riverboat up the Mekong Delta. On September 12, 1970 he married the love of his life, Ann McAlpine of Pasadena, CA and their love flourished for over 44 years. In 1975, Tom and Ann were baptized as one of Jehovah's Witness and moved to Seaside, OR where they raised their four children and enjoyed a rich spiritual life. Tom, who was already a skilled welder, learned the logging trade and became a timber faller, which he enjoyed for many years. After a serious accident he returned to welding, where he worked on the oil platforms in Alaska and later worked with his brother, Joe Hubik at the Ogilvie Company in Astoria OR. He worked there until 1997 when he was first diagnosed and treated for cancer. Tom was an example of endurance. During his many trials he always had a joke or a smile on his face, finding humor when no one else could. He was a hard worker and earned respect from all those who knew hm. He was a creative artist, sculptor, woodworker, and builder. He liked camping, hunting, fishing, hiking and enjoyed collecting stamps and coins. He loved and lived his life fully. Tom is survived by his wife Ann and their four children: Tania McClung, Erin Bieberdorf, Ian and wife Kanjana Hubik and Megan Wright. He is also survived by his one granddaughter Kyra McClung, sister Theresa Smelser, brother Richard Hubik, sister Nora Hubik, brother Robert Hubik, his sister in-law Debi Hubik and her three children Melissa Anderson, Anthony and Patrick Hubik, brother in-law Roy Weightman and Tom's many in-laws, cousins, nieces and nephews to which he loved dearly. Tom is preceded in death by his parents Louis and Jane Hubik, brothers Michael and Joseph Hubik and sister Noel Weightman. Services will be held March 8th, 2014 at 2:00pm at The Kingdom Hall of Jehovah's Witnesses, 2667 Highway 101 N., Seaside, OR 97138.

Funeral Home:
Hughes-Ransom Mortuary Seaside
220 N Holladay
Seaside, OR
US 97138
To order memorial trees or send flowers to the family in memory of Thomas Hubik, please visit our flower store.