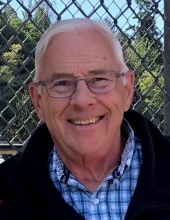 Tom was born December 28, 1950 and raised in Astoria, Oregon, where he met and married his high school sweetheart, Lisa Thompson. After their wedding they moved to Klamath Falls, OR where Tom attended Oregon Technical Institute, studying diesel mechanics. They settled in Kalama, WA where they raised their three children. Tom worked for many years at Heavy Hauling, and owned and operated a dump truck building local logging roads. Eventually his skills led him to crane mechanics where he worked for Coast Crane Company and Marine Mechanical, Inc, a career that took him around the world.

His life revolved around his family and his hobby of restoring antique trucks. His hobby allowed him to meet many people from all over the globe and spend time with his son, who shared his passion. His expertise won him awards and accolades from his peers.

Tom loved spending time with his grandkids. He spent many hours giving truck rides around the neighborhood, fishing, going to baseball games, and hosting movie nights with his special homemade popcorn. He is survived by his children Kelly (Trask), Kate (Justin), John (Joni), and six grandchildren (Finn, Kasen, Drew, Sofia, Mac and Hank). He is also survived by brothers Paul (Carol), Dave (Helen), Dick (Sandy) and sisters Eileen and Theresa (Lindsey). He is preceded in death by his wife Lisa and parents Lawson and Rosemary.

The family will be holding a Celebration of Life next summer and looks forward to hearing your stories about Tom. Donations can be made in his honor to the Pacific Northwest Truck Museum in Brooks, Oregon.
To order memorial trees or send flowers to the family in memory of Tom Stevenson, please visit our flower store.