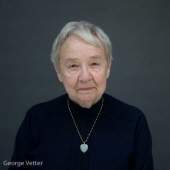 March 1, 2016, Treva Mae Haskell of Cannon Beach, passed away peacefully after a long battle with cancer. Treva is survived by her daughter and son-in-law Sue and Mark Truax of Gearhart, son and daughter-in-law David and Leslie Haskell of Astoria, granddaughters and grandsons-in-law; Kelli and Brian Taylor of Cannon Beach, Toni and Justin Bennett of Gearhart, Shelby and Justin Gagnon of Portland, grandson Kyle Truax of Seaside, granddaughter Bailey Haskell of Astoria and great grandchildren Lilli and Aubrie Taylor and Derrick, Ellie, and Braxton Bennett. Treva was preceded in death by her mother and father, Cecile and Hollis Harp and husband Bruce Haskell. Treva Mae Haskell was born November 26, 1932 in Winfield, Kansas, to Cecile and Hollis Harp. She spent her childhood playing with her cousins on the family's oil lease, playing in the local pond, and learning how to sew. Treva often reflected back on growing up in the Great Depression, remembering that she never knew her family was poor because everyone else was, too. At an early age, she had a deep desire to travel, but her parents were homebodies. She would joke, she was switched at birth and must have been born to gypsies because she wanted to see the world so much. She loved school and learning. She graduated from Winfield High School in 1950 and attended one year at a business school studying secretarial duties. It was after a year of college that Treva began her adventures when she moved to Seattle, Washington with a girlfriend. She was employed at an insurance office and loved exploring the big city. It was at work one day when she met the love of her life, Bruce Haskell, while having lunch in his family's restaurant in the same building as her office. Treva and Bruce married September 14, 1956. They resided in West Seattle, enjoyed boat racing, and had a lot of fun together. In 1960, Treva gave birth to their first child, Susan. Looking for a change of pace, the family of three moved to Cannon Beach. They began a new adventure in hotel ownership when they purchased the Surfview Hotel with Dorothy & Gordon McRae. During this time, Treva and Bruce welcomed their second child, David. Treva enjoyed meeting the guests who stayed at the hotel but shortly realized that hotel ownership wasn't for them. So, Bruce and she searched for their next adventure. At this time in Cannon Beach, Krutchkies Candy Store and The Driftwood restaurant were for sale. Bruce had worked in the restaurant business for many years and wanted to do something new, so they bought the candy store! The doors to Bruce's Candy Kitchen opened April 1, 1963. This is where Treva would spend the next several decades creating homemade confections, thousands sweet memories, and building a family business that would become an institution in Cannon Beach. When not working at the family business, Treva and Bruce enjoyed bowling, going to movies, socializing with friends, and visiting their favorite establishments around town, The Whaler & Driftwood, for music and good times. Treva enjoyed working hard and playing hard too! In 1982, Treva lost the love of her life; her husband Bruce passed away from cancer. Devastated but not deterred, she kept the family business going with the help of her children and dedicated employee Paulette Picard. Treva worked until her retirement in the early 1990's when she slowly stepped out of her role in the family business and passed the candy reigns to the next generation. April 1, 2016, Bruce's Candy Kitchen will celebrate 53 years in business, the decades of success are owed to Treva's hard work and determination. April 1, 2013 she proudly joined her family and community at the candy stores 50th anniversary that will go down in history as one of the best parties in Cannon Beach! "I am not the same having seen the moon shine from the other side of the world." -Mary Ann Rodmacher. As a young child growing up in Kansas, Treva dreamed of traveling the world, seeing new places and learning new things -- this dream became reality. With her children, husband, and friends, she traveled to Hawaii, Disneyland, Washington, and Kansas, but later in life is when her real adventures began. In 1984, she made her first voyage out of the country to China. After this trip she was officially "bit by the travel bug" and in her lifetime visited over 15 countries on 4 continents. Treva had a great time Everywhere! Throughout her life, Treva was involved in many philanthropic groups and activities. In her children's youth, she was a proud member of the Cannon Beach PT0 Rally Girls and SHS booster. Later in life, she held positions on the Cannon Beach Chamber Board, Cannon Beach First District Board, and supported a variety of local events. Treva had a great passion and talent for sewing, knitting and cross-stitching. She also enjoyed reading mystery novels, attending the local theatre, and being a committed, loyal friend to many Cannon Beach natives, such as Sally Steidel, with whom she'd sip coffee, grab lunch, or continue to build to her passport. In lieu of flowers, the family asks that you support one of these causes deep to Treva's heart: SMART reading program and/or Clatsop County Animal Shelter. In support of SMART, please send memorial gifts to SMART 101 SW Market Portland OR 97201 writing "In memory of Treva Haskell/ Clatsop County SMART" in memo section of check. Or Clatsop County Animal Shelter 1315 SE 19th St. Warrenton OR 97146.