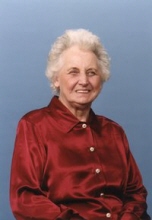 Virginia Mae (Bedortha) Singleton, formerly of Astoria, Oregon, passed away August 23, 2013, in Hillsboro, Oregon. She was born to William and Lucy Bedortha August 8, 1920, in Blaine, Oregon. Virginia grew up and attended schools in Tillamook County, but spent most of her life in Astoria, Oregon.
She was a homemaker who enjoyed making her house a home, spending time in the community and doing for others. Virginia was a caregiver to many, never putting her needs before others. She was preceded in death by her first husband and father of her children, Harley Corder, and her second husband, Clarence Singleton.
She will be remembered for her loving spirit that was extended to both friends and family. She is survived by her daughter and son-in-law Delores and Doug Davenport, son and daughter-in-law Howard and Judy Corder, son and daughter-in-law Ed and Vicki Corder. Grandchildren Denise and Adam Leach, Richard and Lora Vetricek, Dean and Evie Vetricek, Tara and Bryan Mestrich, Tracey and Dewayne Lester, Brenda and Mark Pedersen, Brian and Lori Corder and Amanda and Reggie Dupee. Great-grandchildren Naomi, Kyle, Dillon, Jake, Tosha, April, Ashley, Aiden, Mia, Makayla, Darius, Chloe, Tasia, Natasha, Eddie, Bailey, Cody, Sydney and Emily. Great-great grandchildren Madison, Makinley and Mila. Sister Faye Ruzic and sister and brother in-law Ruth and Bud Haskell and brother Alvin Bedortha.
She was preceded in death by 8 sisters and 6 brothers Edith Corder, Alice Parker, Lee Reith, Wilma Woodington, Jim Bedortha, Luke Bedortha, Chester Bedortha, Thomas Bedortha, Robert Bedortha, William Bedortha, Nellie Bedortha, Mary Harrington, Crystal Bedortha.
A memorial service will be held September 8, 2013, at 1:00 p.m. at Hughes-Ransom Mortuary Chapel in Astoria, Oregon. Hughes-Ransom Mortuary is in charge of arrangements.
To order memorial trees or send flowers to the family in memory of Virginia Mae Singleton, please visit our flower store.