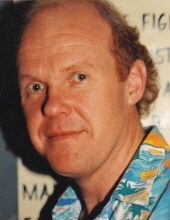 He attended Wilson High School in Portland, Oregon. He continued his education at the University of Oregon in Eugene, Oregon. He had a real estate career in Portland and in Seaside.

Bill loved Jesus with all his heart and soul.

He enjoyed music, belonging to the Musicians Union of Seattle. In his twenties, he traveled with various bands playing bass guitar throughout the western United States and Canada. He was invited to play bass guitar in every church he attended on their worship teams.

He loved surfing at the Cove in Seaside and was known by the local surfers as "Seadog". He was well respected and liked in Oregon most notorious line up, Seaside Point.

Bill never lost the "boy" in him. He had a wonderful sense of humor, the gift of creativity and most important a sense of love.

He is survived by his wife, Patty of Seaside, a brother and his spouse, Ric and Rebecca Siewert, and several nieces, nephews and very special cousins; Lisa, Anita, Laura and Brian.

He was preceded in death by his parents, Otto and Jane Siewert.

Arrangements are with Hughes-Ransom Funeral Home.
To order memorial trees or send flowers to the family in memory of William Andrew Siewert, please visit our flower store.