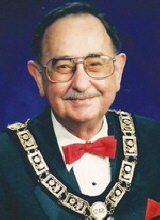 William Charles "Bill" Campbell, 82, of Seaside, died Thursday, Nov. 1, 2012, at home.
He was born Sept. 21, 1930, in Columbus, N.D., to Jack and Elsie (Ljunggren) Campbell.
He graduated from Lignite High School in Lignite, N.D. He attended the state teachers college in Minot, N.D., and received a bachelors degree from the University of North Dakota. He received a masters degree from the University of Montana in Missoula.
He served in the U.S. Navy from 1951 to 1955.
In 1955, he married Shirley Johnson in Hope, N.D. She survives, residing in Seaside.
Mr. Campbell taught high school business subjects for 10 years. He spent 24 years teaching computer programming at Clatsop Community College in Astoria. He retired in 1995.
He was a member of Our Saviours Lutheran Church in Seaside, and was very active in the American Legion and Seaside Elks.
Family members said he enjoyed working crossword and Sudoku puzzles. He also enjoyed coaching Little League baseball for many years.
In addition to his wife, he is survived by a son, Brad Campbell of Hammond; a daughter, Roberta McKee of Cocoa, Fla.; four grandchildren, Brittney Gantenbein and her husband, Zach, of Warrenton, Brooklyn Campbell of Hammond, Christopher R. Dunn of the U.S. Air Force and Geoffrey A. Dunn of Nampa, Idaho; a great-granddaughter, Karli L. Gantenbein of Warrenton; two sisters, Jean Breidenfeld of Ashburn, Va., and Della Amaiz of Palm Beach Garden, Fla.; a sister-in-law, Marcia Valentine of Gualala, Calif.; and numerous nieces and nephews.
He was preceded in death by two sisters and a grandson.
A memorial will be announced at a later date.
Private burial was at Ocean View Cemetery in Warrenton.
Memorial contributions may be given to the Clatsop Community College Scholarship Fund, in care of the CCC Foundation, 1651 Lexington Ave., Astoria, OR 97103
To order memorial trees or send flowers to the family in memory of William Charles Campbell, please visit our flower store.