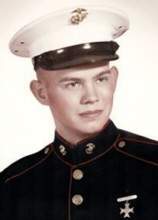 William Curry "Bill" Heaton October 11, 1940 December 18, 2013 William (Bill) Curry Heaton was born in Willamina, OR, on October 11, 1940, to D'arcy and Cloe (Curry) Heaton. He attended school at Morrison grade and then graduated from Astoria High School. After graduation in 1958, he attended Pacific University and then joined the Marines, where he served as an Embassy Guard in Tunis, Tunisia. Bill married Patricia Pleiss in 1965 and settled in Astoria, Warrenton, and finally Knappa in 2005. William worked for Northwest Natural Gas then became a stockholder of Astoria Plywood Mill, where he spent his time on the Columbia River as Captain of the Ellen U. Bill worked and then finally retired from the city of Astoria's public works department. William (Bill) enjoyed hunting, fishing and clam digging. When he was not outdoors he dedicated his time to his children and grandchildren. He will be loved and greatly missed. Bill is survived by his wife Patricia and three daughters Lori Coy of Clatskanie, Correen Bailey of Auburn, WA, and Billie Jeanne Cokley of Tigard. Five grandchildren, McKenzie and Mitchell Cokley, Emma and Megan Bailey and John Coy, his sisters Rae Wolf of Arizona, Aletha Mueller of Longview, JoAnne Newland of Troutdale, brothers Kenneth Johnson of Troutdale, Thomas Johnson of Astoria and numerous cousins, nieces and nephews. William was preceded in death by his sister Dixie Caldwell of Gresham. Hughes-Ransom Mortuary in Astoria is in charge of arrangements.