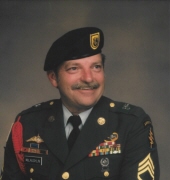 William Gray McLaughlin was born to Grant and Imogene McLaughlin of Waynesboro, VA, On August 5, 1947. He passed away in Portland, OR on July 8, 2018 at the age of 70, after an 18 year battle with war related lymphoma. "Mac", as everyone calls him, is survived by his wife, Rainey Carlson of 34 years from Knappa Svenson, and his son, Troy Grant McLaughlin of Salcha, Alaska. His children from a previous marriage, son, Eric McLaughlin and his wife Tina, daughter Tonja and her husband James Liptrapp, daughter Sonja and her husband Mike Patterson and daughter Monica McLaughlin all from Virginia. Brother in law, Butch Carlson, sister in law, Kathy Carlson, nephew Andrew Carlson, his wife Stephanie and children Kailey and Cameron Carlson. Nephew Clint Carlson and his wife Jodi and daughter Sophia of Knappa. Nephew Brad Carlson, wife Leihanna and their children Beau, Brody, Courtney and Cooper Carlson, of Cathlamet, Washington. Sister Mary Daughtry, husband Dave and their sons, Brian and Micheal. Sister Dora Coffee, her fianc, Vern and daughter Penny Martin. Sister Ivy Hewitt, husband Irving and son Bernie, his wife and daughter, Christine and Brianna, all of Waynesboro, Va. Mac began his 22 year military career when he joined the US Army at age 17. He was deployed all over the world including Europe, Africa, Middle East, and two tours in Viet Nam. He was a paratrooper in the Special Forces Group with well over 2000 jumps finally completing his career as a Master Sargent in the 1st Special Forces Group at Fort Lewis, Washington. After retiring from the military Mac worked for the United States Postal Service in Portland, Oregon as a postal carrier for 20 years. His passion was hunting, fishing, camping, clam digging and taxidermy. Mac had a knack for making friends easily. He loved Oregon and most of all of his family. There will be a viewing/visitation at Hughes Ransom Mortuary Chapel in Astoria, Monday, July 16th from 9am to 5pm. A graveside service at Ocean View Cemetery in Warrenton is scheduled for Tuesday, July 17th at 11am. A reception to celebrate Macs life will follow at his home in Svenson. In lieu of flowers, the family is asking that donations be made in Macs name to the American Cancer Society. For more information please visit www.hughes-ransom.com or www.facebook.com/hughesransommortuary/