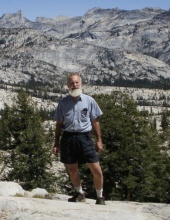 On the morning of July 17, 2022, William Morris Harper Jr. known to friends and family as “Bill” left this world just as he had lived, in his own time and on his own terms after a long battle with cancer. He was a soft-spoken man with a big presence.
Born July 22, 1949, in Venice, California to Eleanor and William Morris Harper Sr. Bill was the youngest of 3 children, and adored by his older sisters Judy and Cathy. Growing up Bill traveled the world with his family and spent many summers and weekends at the family cabin in Yosemite. As a young man he studied abroad and served in the United States Army. After the Army he spent his years hiking and biking around the United States.
Bill was always passionate about biking, backpacking, nature, and music. He was self-taught on many instruments from the saxophone to the bagpipes, which he became well known for playing outside on sunny days. He shared his love of these hobbies with all He knew.
In 1978 Bill met Sally Kingsley while planting trees for reforestation in the Ochoco Mountains of Central Oregon. They spent their first years together living on their property in Halfway, Oregon. They married in 1980 and welcomed a son William Morris Harper III and daughter Emily Karen Harper. They moved to Astoria, Oregon in the late eighties where Bill worked for the Oregon Department of Transportation and raised their family until Bills retirement.
In his later years Bill was reunited with his eldest son Paul Mueller, the reunion brought so much joy to all involved and gave Bill more to love and adventures to be shared.
Bill was able to spend the last years of his life between Astoria and his family cabin in Yosemite, where his heart was most as home. He never let his diagnosis stop him from living life to it’s fullest. He enjoyed his time with family and his beloved pup Chief until the very end. His final days were spent surrounded by family and love.
Bill is survived by his wife Sally Harper, of Astoria. Sisters, Judy and Cathy of California. Children Paul & Danquin Mueller of California. William Harper III & Ashley O’Bryant and Emily Harper & John Gentner, all of Astoria. Grandchildren Payton, Amelia and William IV “Liam” Harper of Astoria, Shelton & Maxwell Mueller of California and surrogate grandchildren Merrick & Bristol Jump of Astoria.
We would like to thank Lower Columbia Hospice for their compassionate care, you were a great comfort to Bill and his family during his final weeks.
A celebration of Bills Life will be held on Saturday, August 6, 2022, at 3:00pm at Pier 39 event room in Astoria, Oregon.
To order memorial trees or send flowers to the family in memory of William Morris Harper, please visit our flower store.