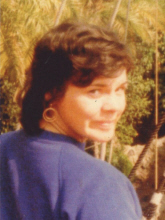 Zada Ellen Worthington, 71, Passed away January 25, 2014, in Warrenton, Oregon. Zada was born to William H. and Capitola B. (Foltz) Knight on April 23, 1942, in Fort Madison, Iowa. She graduated from Gresham Union High School in 1960, and attended Mt. Hood Community College for 3 years. Zada Married Jackie L. Windsor of Beckley, West Virginia, in 1961; they later divorced. In 1967, she married Aubrey A. Cummins of Boring, Oregon; they later divorced. In 1989, she married Charles Wyland; he passed away from cancer. Zada married Donald J. Worthington in 1995 in Portland, Oregon; he passed away from mesothelioma. Zada served in the United States Army for one year. Her occupations included nursing, legal assistant, social worker and mother. She enjoyed gardening, quilting, canning, reading, camping and cooking. She was a member of the American Legion. Zada was always there to help anyone needing help. Full of love and advice. Nobody ever left her home hungry or thirsty. I am a better person having known her. We will all miss her. She was preceded in death by her parents, daughter Dorothy B. Cummins and sister Colleen Stottlemeyer. Zada is survived by her daughter and son-in-law Bonnie and Peter Griffin of Portland, Oregon. Grandson Josh Griffin of Monmouth, Oregon. Granddaughter Elizabeth Griffin of Portland, Oregon. Granddaughter Heather McKinney of Prineville, Oregon. Great-grandson Lucas Griffin of Prineville, Oregon. Great-granddaughter Hadassah Smith of Prineville, Oregon. Great-granddaughter Trinity Smith of Prineville, Oregon, and sister Doris Bruns of Weve, Iowa. Contributions may be made Cystic Fibrosis Foundation or the American Legion. A memorial service will be held at a later date.